Future of Risk
Desktop Nav
Sign Up for Email Alerts 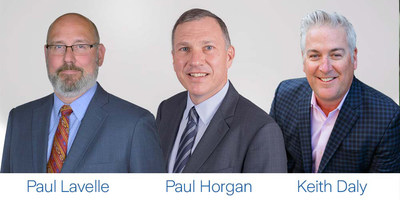 U.S. National Accounts leadership transition
Paul Lavelle, who has been Zurich North America Chief Claims Officer since 2018, will move to Zurich's U.S. National Accounts business on April 1 as Head of U.S. National Accounts. Lavelle will report to Kristof Terryn, CEO of Zurich North America with dual reporting to Sierra Signorelli, CEO of Commercial Insurance for Zurich Insurance Group. Lavelle will be responsible for the direction, management and performance of all large commercial and specialties business in the United States. Lavelle has more than 30 years of insurance experience and has held Underwriting and Claims senior leadership and management roles, first for Allstate and later at American International Group, Inc. and National Union Underwriting.

Paul Horgan will stay on through the next year to serve as a senior advisor to the Zurich North America CEO. His retirement will come after 30 years in the insurance industry, which includes 15 years of service to Zurich.

"Paul's perspectives on the business and his unwavering commitment to our customers has meant a great deal to me personally and played a major role in bringing Zurich to its current leadership position," said Terryn. "I am especially pleased that Paul's retirement will be preceded by his role as a senior advisor."

Claims leadership transition
Succeeding Lavelle as Chief Claims Officer on April 1 will be Keith Daly, who has been President of Personal Lines for Farmers Insurance since 2018. Prior to that role, he served as Farmers Chief Claims Officer. Daly will be responsible for delivering transactional excellence in claims handling, serving Zurich customers with care during those critical moments that require swift action and targeted insights and building solid relationships to help achieve the best claims outcomes. Daly will report to Terryn.

At Farmers Insurance, Daly has led product development, strategy and underwriting efforts for the Farmers Personal Lines, Bristol West and Foremost lines of business. His insurance career began in 1993 as a claims representative trainee at Progressive Insurance. In 2018, Daly received the Insurance Nexus Claims Innovation Award for Leader of the Year.

"Keith is the right person for the right job," said Terryn. "Keith began his insurance career in claims and his decades of experience will serve our Claims organization well."

Zurich North America is one of the largest providers of insurance solutions and services to businesses and individuals. Our customers represent industries ranging from agriculture to technology. Zurich North America is part of Zurich Insurance Group (Zurich), a leading multi-line insurer serving more than 55 million customers – both people and businesses – in more than 210 countries and territories. Founded 150 years ago, Zurich is transforming insurance. In addition to providing insurance protection, Zurich is increasingly offering prevention services such as those that promote wellbeing and enhance climate resilience. Reflecting its purpose "to create a brighter future together," Zurich aspires to be one of the most responsible and impactful businesses in the world. It is targeting net-zero emissions by 2050 and is one of the world's most sustainable insurers, as shown by the S&P Global Corporate Sustainability Assessment. In 2020, Zurich launched the Zurich Forest project to support reforestation and biodiversity restoration in Brazil. The Group has about 56,000 employees and is headquartered in Zurich, Switzerland. Zurich Insurance Group Ltd (ZURN) is listed on the SIX Swiss Exchange and has a level I American Depositary Receipt (ZURVY) program, which is traded over-the-counter on OTCQX. Further information is available at www.zurich.com and www.zurichna.com.

More to Explore
Get News Alerts by Email

Those with 2 years of college can now have the second half paid for while earning full-time pay and growing professionally in the Zurich Apprenticeship Program. SCHAUMBURG, Ill., Sept. 12, 2022...

Collaboration with Work Shield is also expected to help customers with employee retention...